Universal identity of the woman and “the essence” of identity

“Each woman speaks to us of the human condition with equal importance. Each woman stands out with equal clarity against the enormous dark surface, yet they are linked by a firm rhythmical arrangement and the subdued diagonal pattern formed by their heads and hands” (Berger, 1972).

To explore the universal identity of the woman is to explore gender, culture, identity, and the essence of the human being. The quote above from John Berger’s Ways of Seeing triggers the importance of ‘seeing’, being able to read the exterior and discover the layers. I chose the word ‘universal’ to emphasize our unity and common sharing as human beings. By focusing on the identity of woman, I would like to explore the existence of the essence of the human being, and how we come to ’embody’ our identities.

Defining ‘the essence’ appears to be problematic, as the way we perceive our existence has a history. Thus, the way we express our emotions is constructed (Louise, 2014; Blackman 2008), so as the way we ‘perform’ in our daily lives. Performativity makes us unconsciously build a connection towards our emotions. Emotions appear, as we give meanings to our senses, to specific events. Emotions are intellectual (Iskender, 2020). In other words, we perform ‘an identity’ that affects how we perceive our feelings and our emotions. The identity of the woman and the emotions attached to being a woman has a crucial part in the history of humankind (Jung, 1990).

In this context, ‘the identity of the woman’ cannot be described in a linear way, as ‘the identity’ is attached to the social and cultural norms. Carrying the identity of a woman can appear as a ‘mask’, and in Jungian terminology as an ‘archetype’. The archetype is a layer of identity that Jung describes in order to reveal the patterned identities in the history of humankind (Jung, 1990). Why we may need to look deeper into our psyches is referred in Jung’s words: ‘our intellect has achieved the most tremendous things, but in the meantime our spiritual dwelling has fallen into disrepair’ (Jung, 1990: 16). We have been going further with technology, science and artificial intelligence. Our essence is covered with our intellect, and we must look into our’ original experiences’ as humans to go further intellectually and spiritually. The wisdom we have needs the ‘compassion’ of a ‘woman’ (Watt Smith, 2015). If we become aware of ‘the archetypes’ we carry, then we can freely embody an identity, and being a woman would become a choice.

Foucault refers that ‘the soul is the prison of the body’, meaning that our souls are governed through the norms, and the system we live in. As our body becomes ‘docile’, our ‘souls’, ‘essence’ become docile (Foucault, 1991), which forms our identity. Can one be free and docile at the same time? We must be limiting who we are as we describe ourselves through one identity. ‘We are one, yet many’, meaning that ‘we have multiples bodies’ (Blackman, 2012). If we choose to look at ourselves through layers, and if we comprehend ‘becoming’ rather than ‘being’, we can come closer to our identities and our essence. We require de-constructing who we are and re-construct through our intellect and heart. In other words, the history of humankind and our personal lives needs our attention. Our perception of the identity needs expanding so that we can freely become, and build a connection between ‘matter and spirit’ (Jung, 1990:109).

“Just as every individual drives from masculine, and feminine genes, and the sex is determined by the predominance of the corresponding genes, so in the psyche, it is only the conscious mind, in a man, that has the masculine sign, while the unconscious is by nature feminine, The reverse is true in the case of a woman” (Jung, 1990:175).

Jung’s perspective suggests that our ‘essence’, which he calls ‘animus’ carries the same qualities of a feminine and masculine. We both encompass the masculine and feminine. Feminine, in this context, is a symbol, a metaphor for us to comprehend the giving qualities of ‘mother nature’ in a human being; which are nurturing and compassion. Jung also emphasizes that the study of the essence, and the archetypal material ‘is the great unknown, and it requires special study and preparation even to collect such material.‘ Thus, I would like to highlight that my attempt of writing this essay is not to provide an answer, yet to open up a discussion about who we are truly as human beings and what can we learn from the universal identity of a woman. If in our essence, we are ‘nurturing’, ‘balanced’, ‘soft-hearted’ and ‘we can love’ unconditionally, then the symbol of the feminine can be taken as an inspiration to reach to our ideal selves as human beings (Plato, 2007).

Edited Version of “I, Anatolia” and Practice Methods

For initial information about I, Anatolia, please check Practice and Process.

In this version of I, Anatolia, I attempted to put the waking state of consciousness at the core of the characters: Kibele: Anatolian Goddess; Puduhepa: The Queen of the Hittites; Lamassi: Hittite temple prostitute, merchant and smuggler; Anna Comnena: Byzantine princess and historian; The Wife of Nasrettin Hodja: A Humorist and Storyteller in the Ottoman Empire; Poet Nigar: Ottoman Female literary figure; Halide Edip: Novelist, professor of literature, member of parliament from the fall of the Ottoman Empire and the birth of Turkish Empire; Actress: The present moment.

In the editing, as the characters come from one after the other, they are intended to be visiting the present from the past. In other words, time and space that is imagined were not literal; the emphasis was on the emotional and transformational journey of the characters.

In the editing of the film, Kibele, the goddess of Anatolia appears at the very beginning, in the middle, after Anna Komnena referring to her ‘I, Goddess Cybele, as Anna Komnena. A child of mine from the twelfth century bears witness, now stand on the threshold of a new age: A new civilisation, a new compound. A new power, a new convulsion. I, the Mother of Anatolian civilisations, declare that in some ways it is my children, who transform me.’ (Dilmen, 2007; Halat, 1997). Kibele appears again at the very end after the actress, my persona Feride Morçay. The reason for Kibele’s appearance is to signify that the perception of time is not literal, in this state of consciousness past, present and future co-exist. The ‘soul’ in this context, is always present, and it transfers through different characters’ eyes. My attempt of revealing the idea of the transformation of the persona, and all personas breathing through one energy that transforms, is to open up a discussion regarding death and birth in drama, and question the meaning of the existence of the humankind.

Dr. Elif Iskender’s acting method of transformational acting, which has the basis of Stanislavksy’s method, focuses on expanding the actor’s consciousness, allowed me as an actor to be able to dive deeper into the characters’ psyches. This method focuses on comprehending how our brain works, and by understanding how we can build the right connections among our focus, sound, physicality and breath. This method also focuses on strengthening the connection between our hearts and brains as actors and artists and applying this connection into our characters. By revealing the right emotions through our art, we can reach the stage of catharsis, meaning ‘purification of the soul’. The catharsis of the actor can lead to the catharsis of the spectator (Meyer-Dinkgräfe, theatre and consciousness, 77; Schechner, 1985: 113). Thus, the actor has the capability of becoming a healer, which can be the aim of its art.

Nonetheless, I would like to mention that the expansion of consciousness is an ongoing process, and this project has allowed myself to experiment on my development and revealing this awakened state through this art form. The transformational acting method has allowed me to strengthen the understanding of my persona which has allowed me to approach to characters just as I approach to myself (Iskender, 2020).

I, Anatolia is written initially as a theatre play to be staged. In this version, our form is ‘cinematic theatre’. I use the term cinematic, as the play has been filmed in front of a theatre curtain. The acting method was screen-acting, which mainly focuses on ‘being’ through the eyes. In other words, the emotions and thoughts are reflected in the actor’s eyes more than the body.

The sources have been limited, as I, Anatolia was filmed during Covid-19 July-August 2020. The limiting authorities and the need to engage with an audience allowed this form to appear. Editing and collage-making played a significant part in terms of building a strong connection between the start and end of the film. The idea of the cinematic theatre has allowed I,Anatolia to reveal the transformation of characters’ emotions in its focus while creating a sense of the picture as a whole.

“The fully developed actor, then, achieves his effects on the spectator by stimulating the spectator’s senses, intellect and emotions; both through stimulating all these, and unmediated, the actor reaches to the spectator’s Self, pure consciousness, which is the ultimate target of his art and skill” (Meyer-Dinkgräfe, 2001: 119).

As an artist-actor, my aim in this project is transferring the higher state of consciousness, and stimulating spectators’ intellect and emotions from the point of view of a someone, who stands in between East and West, Anatolia.

Furthermore, as this project is a production made by an amateur solo-performer with limited sources, the form needed to be multi-disciplinary to create depths. Collage-paintings that are filmed have allowed showing different stories in multi-layered ways. As this form was created through the ‘thought-flow’ technique, in which instead it uses its brush without ‘thinking and deciding’, rather letting its hands paint from the heart. Through the thought-flow technique, the artist is able to dive into its sub-consciousness. In I, Anatolia while creating collages and paintings, I aimed to dive into the characters’ subconsciousness, which is a creation of my collection of materials about history, research, and also my imagination and empathy towards the story in the script of I, Anatolia. 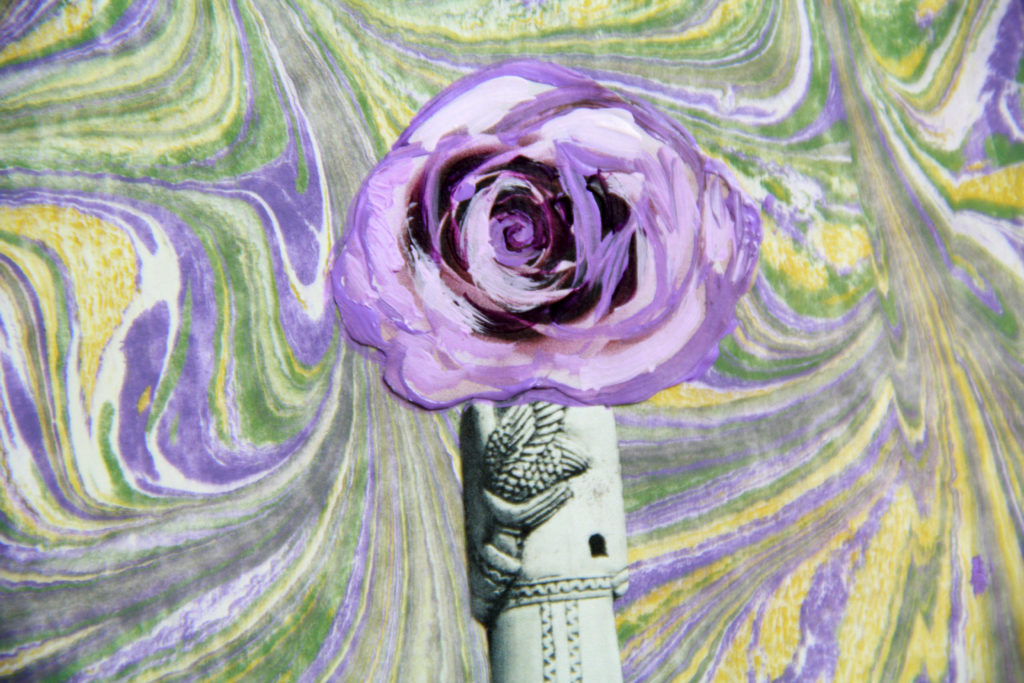 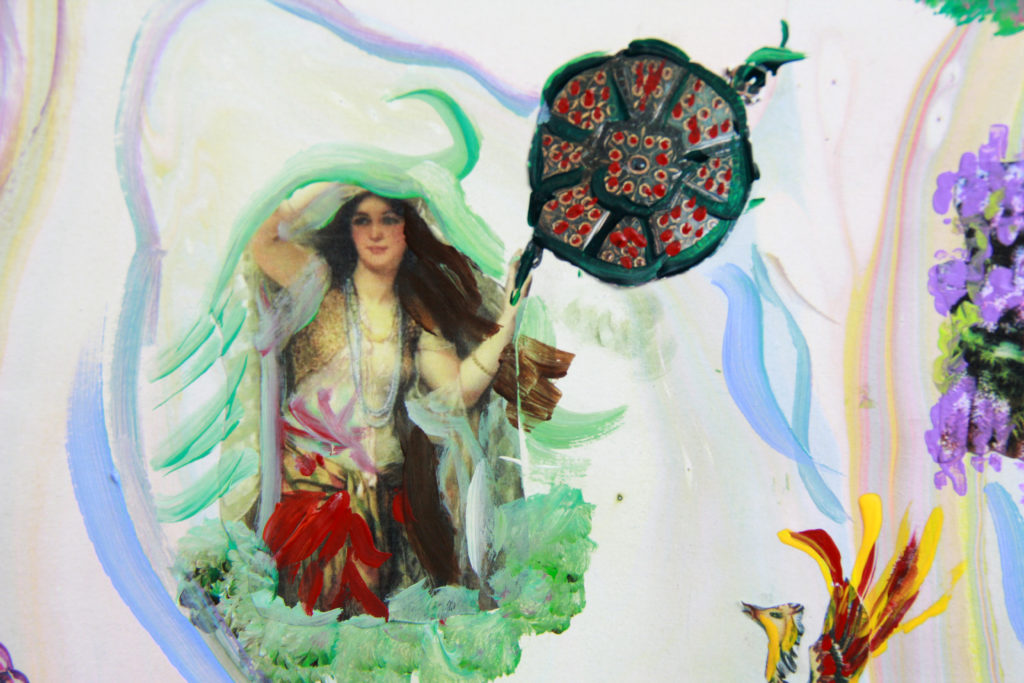